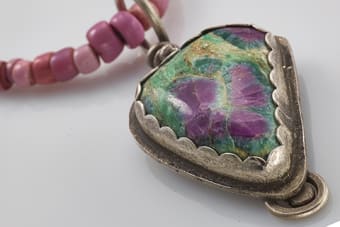 Since 2011 jewellery designer and creator Jeannine Rosenberg has been part of the Uxbridge Studio Tour. The 2018 tour was a heart wrenching and challenging tour for Jeannine, and 2019 marks a new chapter in her creative career. Here's a lovely piece about Jeannine's journey over the past 18 months.

This year marks the eighth year that I have been involved in the venerable Uxbridge Studio Tour. For some people I am still a pup as there are those who have been doing this from the very inception of the tour.

In 1985, a group of likely starving Uxbridge artists had a vision for a free self - guided tour that would enable people to journey through the beautiful countryside that surrounds Uxbridge and environs and have a peek into the incredible living and creative spaces occupied by the artists on the tour.  Thirty four years later it is a must do event on so many calendars. I am proud of my association with the artists out here and I value the friendships that I have developed as a result.

I make silver jewelry and I have always known that I would do so. It just took a very long time to come to this place. I made my first jewelry in the 70s and didn’t return to it until the 2000s. One of the reasons I picked up the torch again was because my husband challenged me to face whatever it was that I was afraid of and take a class, “for God’s sake stop talking about it and do it.” That was John in a nutshell.

I took some classes and when it became obvious I needed a longer and more intensive classroom experience, again it was John who encouraged me to take classes at Idyllwild School of Arts in California and with Marilynn Nicholson at the Taos School of Metalsmithing, in Taos New Mexico.

He wanted me to try the Uxbridge Studio Tour and I was accepted for the first time in 2011. Consistently I would work my butt off all year to have as many pieces as possible and pretty much every year I would totally lose my mind the Wednesday before the tour. Not enough pieces, not good enough, the usual self-sabotage. He stuck by me and told me I would be fine and of course I was.

A few years ago my husband of 35 years was diagnosed with Mild Cognitive Impairment. For those who don’t know it, it is really the thin edge of the wedge of dementia. Last year I had my little breakdown early and even though John’s condition had deteriorated to the point of an Alzheimer’s diagnosis he rallied. He gently took my hand, walked me down into my basement studio space which was a total disaster zone.  With his help and patience we discovered many half- finished pieces squirrelled away waiting for the final finishing touch, somehow placed aside for just the right moment of creativity. Things I could easily rework, repurpose or restring for additional pieces to sell.  It worked and I had a great tour.

He passed away last September.  He was in the hospital unresponsive the weekend of the tour. I told him all about it anyway. I would like to think he understood some of it but I will never know.  This year I am on my own in so many ways but I like to think he is residing in spirit in my new living and studio space  and that he is happy for me in that I am participating again.  Today is my bad day and I am going to channel him for support. I am sure he will be there for me in spirit.

Find out more about Jeannine and her work on her profile page. This year you can find Jeannine at ceramic artist Saundra Reiner's Studio 2. To see more of Jeannine's work visit her website rosenbergdesigns.ca